Over the weekend, I made a Notes app promise to not return to the multiplex until I’m fully vaccinated. Local theaters have either already opened or will re-open this weekend. As an individual with the movie disease (the insistent need to see every picture), I am very excited to return. It still feels slightly irresponsible to rush to the multiplex for a matinee of Promising Young Woman when myself and I have to assume a majority of the theater staff haven’t had their chance to get their respective shot. I feel like I rank very low in the necessity to get the shot. The order should’ve been Farm Workers, first, then medical professionals, seniors and those at high risk medically. At the very bottom should be me, just right above police officers. If anybody should be last, it’s police officers since wearing facial coverings never seemed to be a priority.

My big concern about people returning to theaters is that we need use this time on how to properly behave at a movie theater. Firstly, I think we need to determine when it’s okay to talk during the picture. Yelling “I wish this movie was over,” while watching Wonder Woman 1984 is an example of good talking because that joke is a million times better than the picture. Loudly complaining that you don’t understand The Souvenir is an example of bad talking. When you’re upset that you either don’t understand or don’t like the Van Gogh biopic, it’s not the picture’s fault. It’s entirely you’re fault for picking a picture entirely based on its Rotten Tomatoes score. Unless you have the compulsion to see everything in theaters, do the leg work. Read the reviews, watch some trailers, and look to see if the filmmakers have made anything you liked in the past. Do not be like the senior citizens that sat next to me for Mandy that end up leaving after 15 minutes. A normal movie watcher shouldn’t necessarily go by what the head critic for the failing New York Times likes. The normal movie watcher should check in with Chris Stuckmann on YouTube before rolling out. If Stuckmann looks upset and/or confused in the thumbnail for his review…. The picture is probably not worth your time and effort. 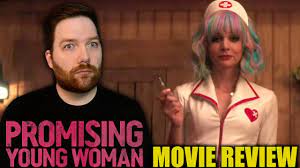 Movie theaters can survive if people make the effort to become movie goers. Maybe Tom Cruise can make a video about the dos and don’ts on proper theater etiquette. I would suggest Christopher Nolan, but no one would be able to understand it since he’s bad at sound mixing.

It will also take a lot from theater management to make this work again as well. I want to believe a manager who thought construction noise wouldn’t be distracting during Ad Astra has seen the errors of his ways, but I’m not hopeful. I want to believe that theaters are going to abandon the full restaurant experience because it’s distracting and smells bad. Just plan ahead or go to a later showing. Do not force the entire theater to suffer through an order of Southwestern pizza fingers. 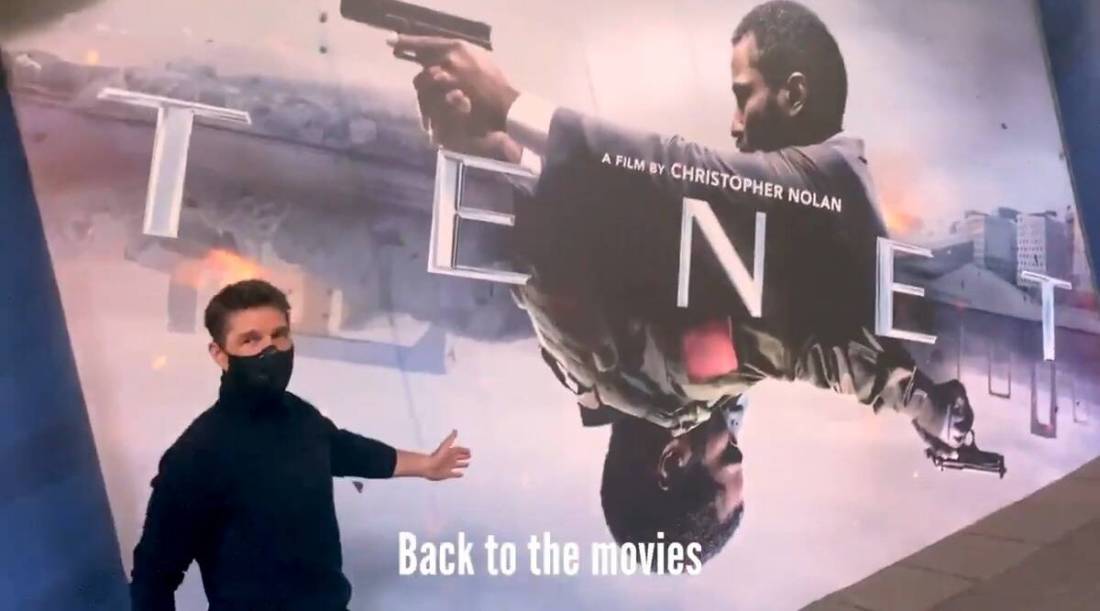 As I’ve said before, I am excited to return because I am less likely to get distracted in a theater. I am committed to seeing it through because I drove there and most likely wore a jacket. I have turned off most distractions from the outside world. I don’t zone out or start looking up other stuff as if I’m on Zoom. I’m not checking to see if that was Frank Doubleday at the start of the picture. I am in the zone and I can’t wait to go back. Of course, that is until someone sits remotely close to me at the art house and sneezes one single time. I should’ve dusted off my copy of “Don’t Sweat the Small Stuff and It’s All Small Stuff” in preparation for the great return. 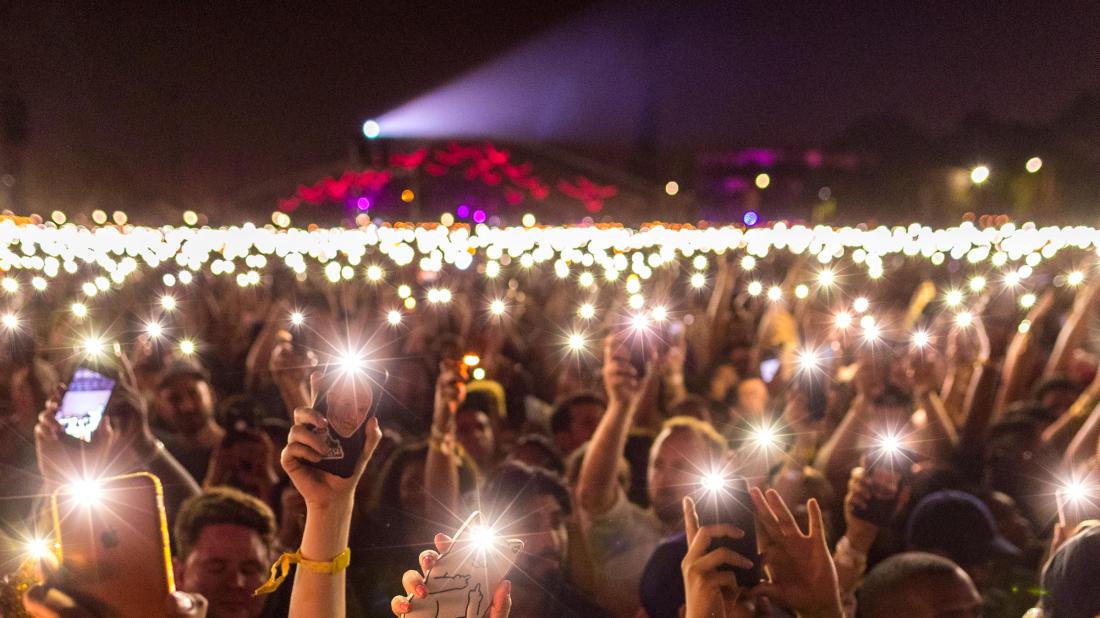 On the other side of the in person viewing experience, I sincerely hope that live streaming concerts continue and become a more viable option. It’s great. I don’t have to do anything. I don’t have to try and look cool or at least less like a plain clothes cop. I don’t have to wait in line and listen to other people’s conversations (the best in line conversation I heard was a person explain how they went hiking with a laptop so they could watch “Endless” by Frank Ocean without any distractions). I don’t have to pay for parking or wait thirty minutes to get out of the parking lot at the end of the night. I go into William Friedkin Sorcerer mode when I’m stuck in traffic. Each time the little battery bar moves down…. I start to think: “will this iPad with a golf cart motor get me home? Will I be the source of more congestion?” (Cue “Betrayal” by Tangerine Dream).

I don’t have to wait in long line for the bathroom or get to the festival early to scout out where the best portapotties are and what the foot traffic will be like. I just have to go on YouTube or some other site and use my own bathroom. I mean, I could take the concert into the bathroom with me. I don’t have to pay fifth teen bucks for a Beyond Burger (well, one would still have to pay that much at a vegan fast causal restaurant because vegan fast casual food can’t ever cost as much as traditional fast food. It’s not that expensive to go plant based, it’s just expensive to go out and eat at the vegan restaurant.).  I’m not going back to live concert venues. I don’t have to worry about cleaning my shoes because god knows what I stepped in the night before or seeing dirt on the Kleenex after blowing my nose for the next few days. I’m not going back to live concert venues. 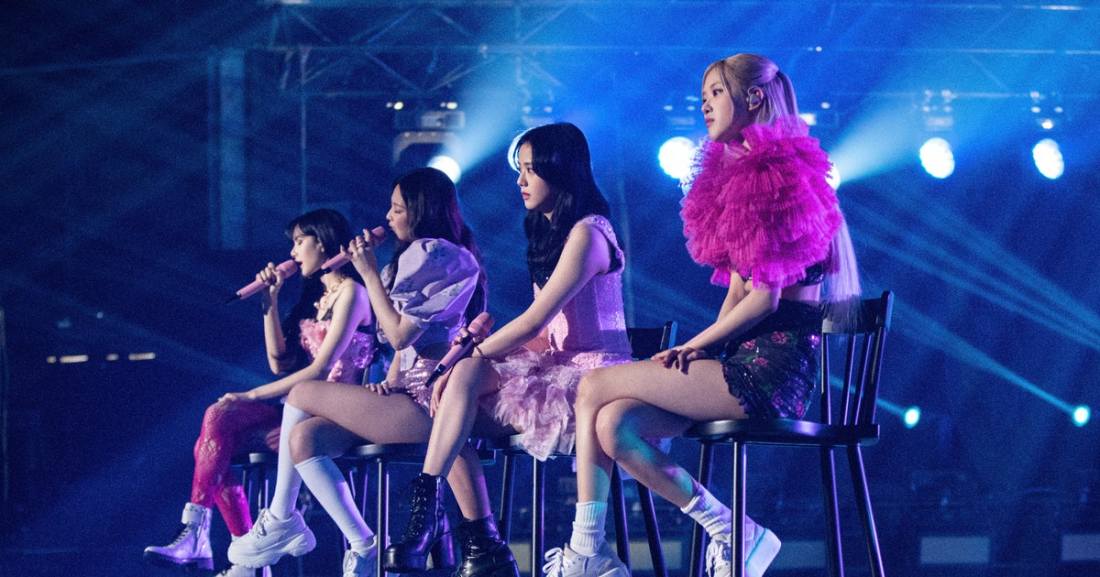 I really enjoyed BlackPink’s The Show because of all of the above but it also lacked a certain pressure. If I had floor/general admission seats for a Blackpink show, I would be worry that I would need to create a meme-able moment to justify the price of those tickets. Something like “Jennie can only hold a Samsung” or the person with the “Rose, do you like Shibas?” sign. Not to switch groups here, but if it was a Loona show, I would be by myself trying to get Hyunjin a loaf of Old Town Baking Company’s Sourdough bread. Once again, cue “Betrayal” by Tangerine Dream. At home, I can just worry about the WIFI and the power going out which feels entirely less stressful. If I wanted to cry during the ballad portion of the show, I don’t have to worry about crying ugly in front of a large group and then that become a meme onto itself. I really like the option of watching live performances on demand. When I want. It completely goes against what a musical concert is. It’s the energy and excitement of being in a room with people who are just as passionate about the same thing you are, but it’s not something I’ve missed entirely. Maybe its age. Maybe I just don’t want to be labeled as an undercover cop at the Stray Kids show.